In a recent edition of this article, we covered why financial markets and underlying economies can appear disconnected, which you can read here.

Since the article’s publication, markets have continued to rebound from the lows observed in March amid relative economic weakness caused by COVID-19.

However, policymakers across the globe responded proactively to the crisis laying the foundations for an eventual economic recovery.

On Thursday, market participants digested the implications of further stimulus, following an announcement from the European Central Bank (ECB) of a significant expansion to their flagship stimulus programme.

We explain the details of the expansion and how attitudes in EU capitals are evolving to fiscal stimulus, potentially bolstering the monetary support granted by the ECB.

Before we delve into Thursday’s announcement, a quick refresher of the Pandemic Emergency Purchase Programme (PEPP) is necessary.

Early in the panic-stage of the virus concerns about liquidity drying up were prevalent, threatening the survival of European companies. Doubts also emerged over the ability of European countries with large debt piles, such as Italy and Greece, to access adequate funding for domestic relief programmes. The objective of the PEPP was to provide essential market liquidity to stimulate investor appetites for bonds and helping drive down the cost of borrowing.

Mirroring the efforts of other central banks, the European Central Bank (ECB) through the PEPP committed to the deployment of €750 billion of stimulus to purchase European sovereign and corporate bonds, easing market liquidity.

On Thursday, the ECB reiterated the Governing Council’s desire to provide even more monetary support to a European economy still suffering from COVID-19 induced lockdowns by intensifying its Pandemic Emergency Purchasing Programme (PEPP).

ECB President Christine Lagarde announced to a virtual press conference the decision to expand the value of the programme’s purchases by €600 billion, taking the total amount of emergency support offered under the PEPP to €1.35 trillion.

Additionally, the duration of the programme has been extended by six months, until June 2021, ensuring the ammunition for the PEPP remains fully stocked. Moreover, any proceeds from maturing principal proceeds of bonds purchased under the PEPP will be reinvested until 2022.

Elsewhere, the Governing Council left European interest rates unchanged, with the refinancing rate (equivalent to the Bank of England’s Base Rate) also constant at 0%.

Lagarde once again, and on almost every occasion she gets, stressed the need for sufficient fiscal stimulus to buttress the eurozone’s economy, overtly throwing the support of the ECB behind the European Commission’s proposal for a €750 billion fiscal recovery fund.

In advance of Thursday’s meeting, surveys revealed most economists expected a significant boost to the value of the PEPP, and consensus estimates of €500 billion emerged. Given the ECB exceeded estimates and the scale of the increase in the programme’s value, markets unsurprisingly reacted positively following Lagarde’s announcement.

Graph 1 below displays one measure which evidences positive market sentiment.  The line chart displays the movement of yields in the hours leading up to and the immediate aftermath of Lagarde’s announcement, with the X-axis measured in minutes.

As mentioned above, Italy and Greece have larger debt piles than other European countries as a proportion of Gross Domestic Product, potentially impacting their ability to borrow from investors if doubts emerge about either economy’s capacity to service its debt. Falling bond yields indicate rising bond prices and reflect increasing investor appetite.  The chart shows how Italian and Greek sovereign bond yields moved downwards by 19 and 7 basis points respectively with Lagarde’s announcement. 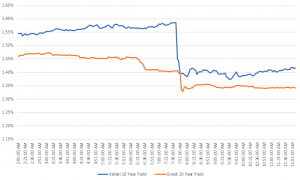 As we have mentioned in previous articles, yields on debt issued as bonds are measured as a ‘spread’ against the yield on an ultra-safe asset. In the eurozone, the most crucial safe asset is German Bunds. The spread on other European sovereign bonds relative to Bunds is what investors demand as compensation. In other words, the higher the spread, the greater the perceived risk.

Graph 2 below shows how the spread between the Italian 10-year yield and its German equivalent fared from March until after Lagarde’s press conference. We can see the difference between yields on 10-year German and Italian debt narrowed to 1.74%, which is the narrowest difference since March.

Monetary stimulus now, fiscal stimulus next, and recovery to follow.

After facing criticism at the inception of the pandemic, the ECB are upping their game by expanding the PEPP to support the eurozone economy and encourage easy financial conditions well into any economic recovery.

The desire for recovery is shared among all the major central banks, and the stimulus is unprecedented in scale. The collective value of the balance sheets of the ECB, the Bank of England, the Federal Reserve, the Bank of Japan and the People’s Bank of China now exceeds $23 trillion.

Fiscal stimulus across the European Union to match the monetary stimulus unleashed by the ECB has not yet materialised, but reasons for optimism on this score are as encouraging;

If other European leaders follow Merkel’s new-found boldness and agree to the EC’s fiscal stimulus programme, the eurozone’s landing from the present descent could be almost pillow-like.